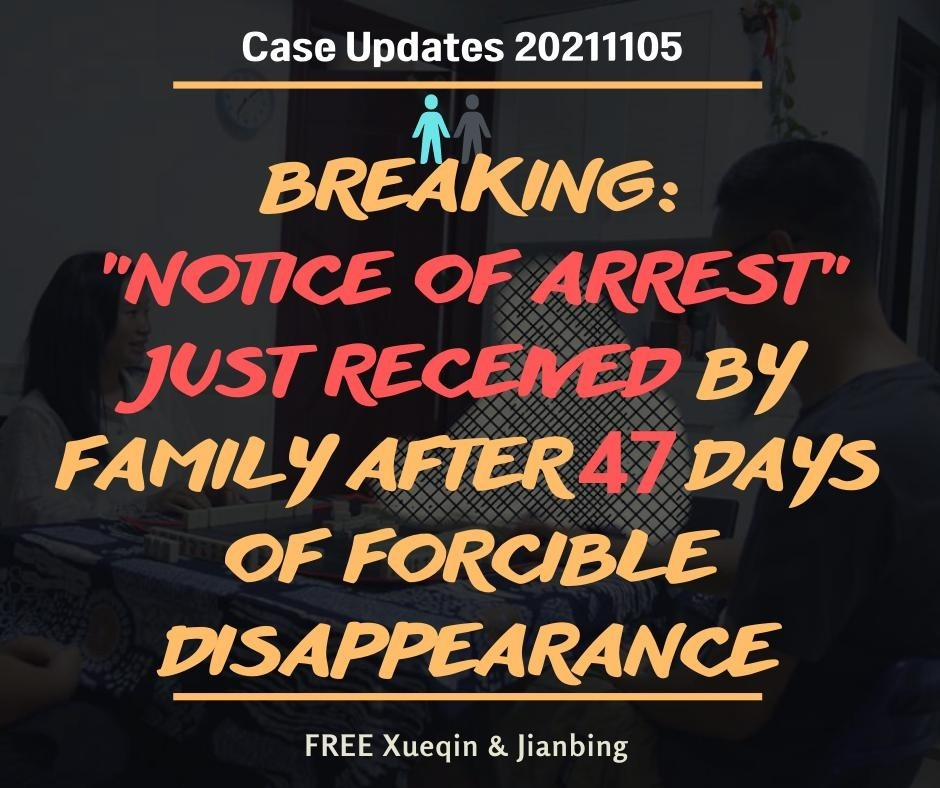 On November 5, Wang Jianbing’s family received a “Notice of Arrest” issued by the Guangzhou Public Security Bureau, informing that Wang was officially arrested on October 27 on suspicion of “inciting subversion of state power.” He is now detained in Guangzhou No. 1 Detention Center. The attorney entrusted by his family has not been allowed to meet Wang so far.

Previously, Wang Jianbing’s family and the attorney entrusted kept repeatedly requesting information of the detention location and the case updates, but they got no answer from the Bureau. On October 21, the attorney and the family went to the Guangzhou Public Security Bureau again to inquire about the case. The Guangzhou Public Security Bureau admitted that they are in charge of Wang’s case, but clearly stated ‘As the case’s involving national security concerns, it’s difficult to arrange a meeting between Wang and the lawyer‘. Later on, after receiving the power of attorney and other relevant documents, the Security Bureau refused to recognize the attorney’s qualifications and denied its visit application and refused to inform the attorneys and family members of the specific circumstances of Wang’s case on the grounds that it “requires more time to verify the authenticity of the materials’. They also requested the attorney to wait for the verification notice.

Up till now the Wang’s attorney is still unable to represent Wang or meet with Wang, nor could they access any information about the case. After a long period of waiting, Wang’s family finally received a “Notice of Arrest”, which was the first notice received after Wang Jianbing was taken away on September 19. And this is the first time Wang’s family learned about his situation 47 days after the incident. Apparently, the Bureau handled the case have seriously violated the Criminal Procedure Law, for their refusal of notifying family members in time after the arrest! In addition to that, Huang Xueqin, who was arrested along with Wang, her family also received a similar Notice of Arrest at the end of October.

After receiving the Notice forwarded from the family, Wang Jianbing’s attorney made it clear that he “will apply for an interview again”.

According to the special official letter number of “[2021] X2” shown in Wang’s Notice of Arrest, it is speculated that the official letter number for the Huang Xueqin case should be “[2021] X1”. The practice of refusing to release case information or issuing detention notices indicates that police escalated suppression of social activism in civil society and made it more invisible.

Also, the families of the two still have not received the notice of compulsory detention which was supposed to be issued by the police 24 hours after they were taken away. The police had previously publicly stated to their families that ‘this notice of detention will not be provided’. From September 19 to October 27, Huang Xueqin and Wang Jianbing were being “evaporated” in the hands of the police. Their family and attorneys had no clues about where they were held, what kind of interrogations they had experienced, whether they were tortured, and whether their personal safety and health were guaranteed, and so on.

Since the forced disappearance of Wang and Huang on September 19, their family and friends have been sending money for the two through the online prison remittance system, but the transactions got rejected and the system showed “verification failed.” On November 5 after the Notice of Arrest was received, they tried again and sent money to “Guangzhou No. 1 Detention Center”, but the transactions failed again. It shows that although the Notice states that Huang Xueqin and Wang Jianbing were detained in Guangzhou No. 1 Detention Center at some point, the actual location of the two is still unknown.

Family and friends of Huang Xueqin and Wang Jianbing strongly demand that the Guangzhou Public Security Bureau and Prosecution Office handle the case by law, ensuring that they could fully exercise their legal rights including meeting with attorneys, and ensuring that they are legally treated in custody. We call for wider attention and condemnation on the worst practice of the authorities!