We are writing to express our worries and demands on the case of Huang Xueqin and Wang Jianbing. At a time when human rights defenders in China face strong hostility and reprisals from the Chinese government, we urge you to avoid your China visit become complicit of the propaganda Chinese government. We sincerely call on your visit to Huang Xueqin and Wang Jianbing in person in Guangzhou.

We are friends of Huang Xueqin, a Chinese feminist and independent journalist who had been arrested once in 2019, and Wang Jianbing, a Chinese occupational disease rights advocate. Since their enforced disappearance and arbitrary detention by the Guangzhou authorities on September 19, 2021, we have taken our limited time and ability to follow up and promote this case.

Regrettably, even in the world outside the prison walls, we do not feel safe and free; on the contrary, we can only release this open letter to you and the world anonymously for fear of reprisals by the Chinese authorities. I wish you to aware and realize that whether it is Huang Xueqin and Wang Jianbing who are inside the prison, or we who live outside the prison walls, in China, the price is jail time and separation from love when one practices the fundamental human rights such as the rights to freedom of speech, assembly and association, which are enshrined in the Universal Declaration of Human Rights.

Huang Xueqin and Wang Jianbing organized weekly gatherings at home to share their insights with the community and they support the fragmented and repressed civil society of China. These practice of freedom of speech, assembly and association elaborated in the UDHR are deemed as “inciting subversion of state power” by the Chinese authorities. We are extremely angry and we reject to accept this accusation.

It has been nearly 250 days since Huang and Wang were arrested and lost contact on September 19, 2021. Among them, Huang Xueqin has been banned from meeting with lawyers and family members, making her completely isolated from the outside world, so we have no way of knowing her physical and mental status. She remains incommunicado until today. Wang Jianbing’s lawyer met Wang for the first and only time online on April 1 this year.

Such online meeting does not mean that the Chinese government follows the rule of law. Regrettably, we learned from the information of the family that Wang Jianbing was held in solitary confinement for five months on the grounds of “Covid-19 quarantine”. Wang Jianbing is suffered from depression, gastrointestinal problems and torture. Based on the past experience, we believe that Huang Xueqin’s situation will not be much different from Wang Jianbing’s situation.

This is extremely worrying news to not only us but the world. The current situation of Huang Xueqin and Wang Jianbing’s cases is likely to demonstrate that the Chinese government is actively using the “Covid-19” and other names to try to invent and create new forms of suppression, in order to avoid the United Nations and the international community’s attention and criticism to “residential surveillance in designated places (RSDL)”.

The Chinese government has long used “residential surveillance at a designated location (RSDL)”, a form of solitary confinement, to suppress political dissidents and NGO activists. According to a report released by Safeguard Defenders in 2021, during the at most six-month RSDL, tortures such as sleep deprivation, abdominal beating, extended and tiring interrogations, and forcing the individual to sit on a tiger chair or dangling stool can be used to force the dissident to confess. Ten UN special procedures, including the Working Group on Enforced or Involuntary Disappearances, have described the RSDL as “similar to isolation and secret detention”, equivalent to enforced disappearances. The Chinese government has drawn international criticism for this.

In the case of our friends Huang Xueqin and Wang Jianbing, we also learned that the police held Wang in solitary confinement and interrogation for at least five months in the name of “pandemic isolation”. The de facto confinement of Huang and Wang are no different from the actual situation of the RSDL. However, by using the ground of “pandemic isolation”, the Chinese authorities have effectively circumvented the use of the terminology of the much-criticized “RSDL” measure on legal paper.

We strongly and fervently urge you and the Office of the High Commissioner for Human Rights to directly express your concern for the solitary confinement conditions of Huang Xueqin and Wang Jianbing, and their physical and mental health, when you visit China and the city of Guangzhou. We call on you to:

As the UN high commissioner for human rights, you play a vital role in the world human rights movement. And we implore and urge you, when you visit Xinjiang during this trip to learn about one of the greatest human rights violations of the century, to remember that in China, those who voice out for the human rights and freedoms of others have also been held in the brutal China’s prisons. 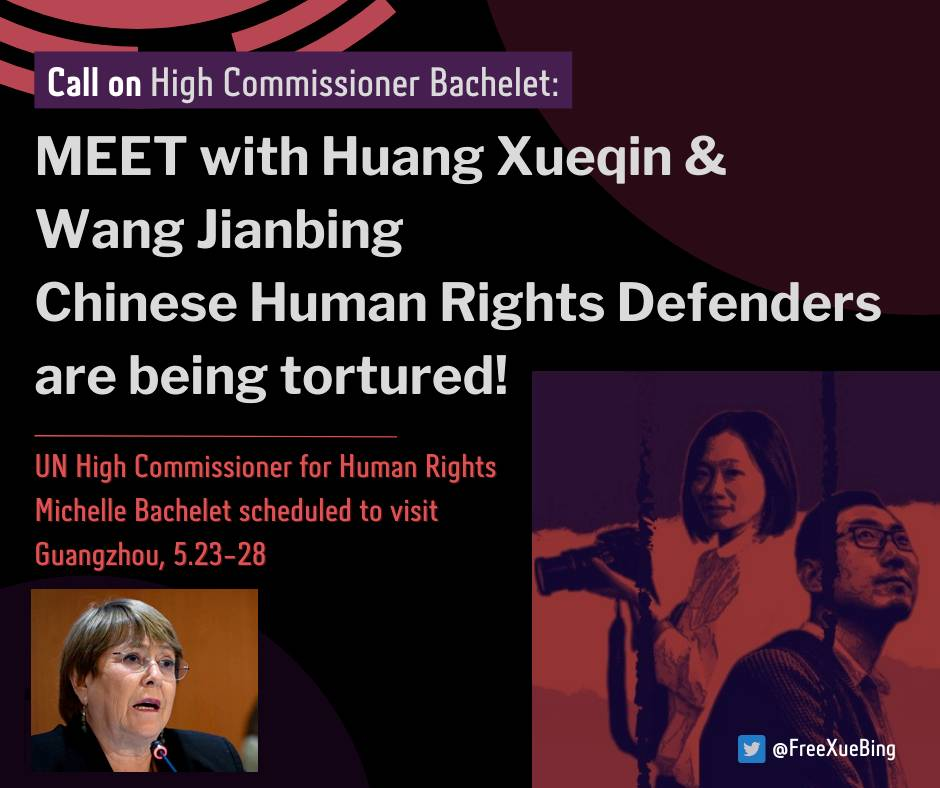 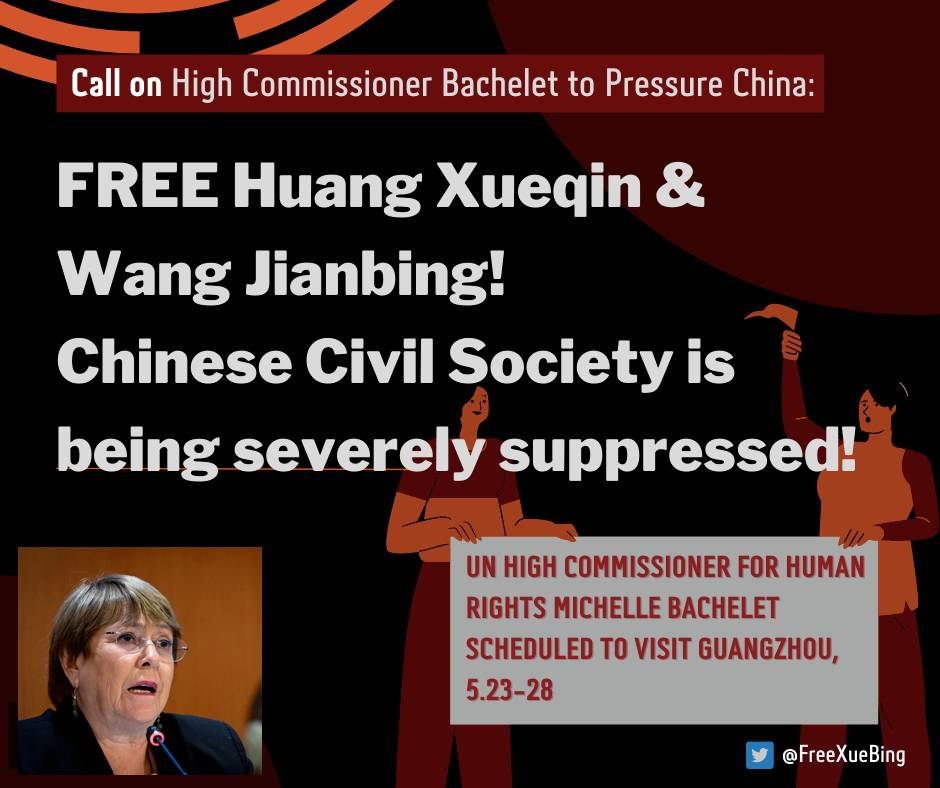